A Daughter Holds On 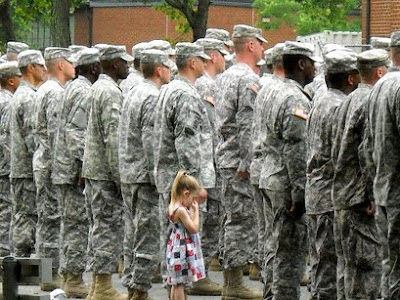 This image breaks my heart. The soldiers were deploying and this little girl would not let go of her father's hand when it was time to line up. She was allowed to join him and held on until he had to go.
Posted by ACDC at 11/29/2009 07:24:00 PM No comments:

Talked to an engineer with the town today and, unless there is a miracle of money, the bridge will be completely out until sometime next spring. The town has started working on the steel frame, but the decking will not be put on until after April 15th of next year.

Yes, that means Patrick won't be able to walk over it to get to work. So now he will have to ride his bike over a mile in the dark both ways to work because of a 20 foot span.

I'm pissed about this. Finally, finally I had him in the perfect location. This took years and many moves and much money (mine, not his) and now he's back to riding his bike on dark windy roads with no lighting.

Tomorrow, I will go over and check this bridge situation out and see what the options are! There has to be a better, safer way for him to get to work besides me taking him and picking him up each day, which would be impossible to do on some days. Geez, I'm really pissed. Just about takes all the enjoyment out of the fact that we've had a dead end for months.
Posted by ACDC at 11/03/2009 04:54:00 PM No comments:

I knew this day would come, but I was sure hoping it would be later.

They're fixing the bridge! The wonderful, broken bridge that has made my road a dead end since May 1st!!

When the bridge was first closed, I was upset. But after a day of realizing that barely any cars were coming down the road, I was in heaven.

I heard some noise from there today and thought that maybe work had started. Patrick confirmed it when he got home from work. He had to ride all the way around. Probably over a mile instead of just a few feet.

Let's hope now that they fix the bridge quickly so that Patrick won't have to ride the loooong way to and from work in the dark! Because, yes, of course, now that we've moved the clocks back it's dark in the morning when he goes into work and dark when he gets out of work.